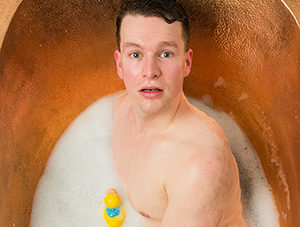 Comedians often get asked by people they hook up with, “Are you going to talk about me in your act? For comedian Zach Zimmerman, the answer is yes.

Today, the hilarious Zach Zimmerman joins us to talk about his debut comedy album “Clean Comedy” where he covers dating and casting his own dong for his boyfriend.