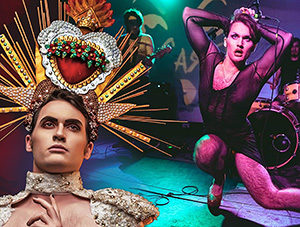 Musician Caleb De Casper knew from a very young age he wanted to be a glam rocker after seeing Little Richard’s appearance on Sesame Street singing “Rubber Ducky.” As a young performance artist, Caleb made quite a statement eating raw cow hearts with blood pouring out of his eyes.

Today, Caleb de Casper stops by the home studio during his first ever tour to play songs from his new album titled “De Casper” which includes his hit single “Good Boy.”