The world has long been filled with secret hiding spots where what could not be expressed in public, could be enjoyed away from the prying eyes of others. Like minded folks could almost always meet for a grand encounter at almost any secluded park, rest stop or private stall.

Even in places as populated as New York City, there was always a place you could go where nobody knows your name, but they’re always glad you came.

In the new short film “Trade Center,” filmmaker Adam Baran returns to the site of the World Trade Center to examine the stories of men who cruised the iconic building for sex before the twin towers fell and how that moment changed not only New York, but the world.

Listen as we chat with Adam Baran about his new film which just premiered at SXSW about what made the Twin Towers a powerful center for trade, the impact of the surveillance state on cruising and can digital hookups replace what’s been lost? 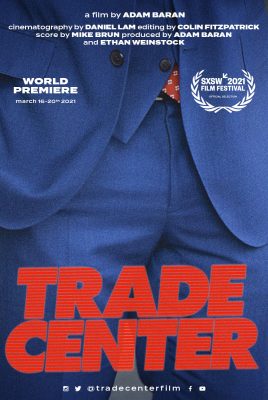 ➤ Producing the documentary Circus of Books about the small family that became a center for the adult film industry.

➤ Curating QUEER|ART|FILM, a monthly screening series, where LGBTQ+ artists present and discuss the films that have most inspired them.

➤ Working as editor for BUTT, the legendary gay magazine published in the early 2000s that got celebrites to talk about their sex lives and featured men of hair and size in their pink paged photo pictorials.

This entry was posted on Tuesday, March 23rd, 2021 at 11:35 pm and is filed under Drag Queens & Kings, Podcast. You can follow any responses to this entry through the RSS 2.0 feed. You can skip to the end and leave a response. Pinging is currently not allowed.