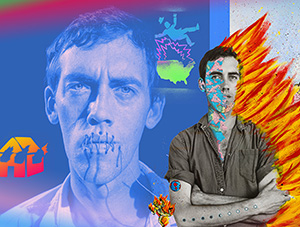 At the height of the AIDS crisis of the late 80s, LGBTQ folks turned to creating art, performance and music to act-up, fight back and fight AIDS.

One of the most powerful voices during the AIDS crisis was David Wojnarowicz, an artist and activist who combined punk music, graffiti, performance, painting and photography into a body of work that celebrated the outsider while speaking out against a hateful government that allowed thousands of Americans to die from AIDS.

Today we’re talking to filmmaker Chris McKim about his new film Wojnarowicz: F**k You F*ggot F**ker which takes us on a thrilling journey through the AIDS epidemic as David Wojnarowicz weaponized his work to wage war on the establishment.