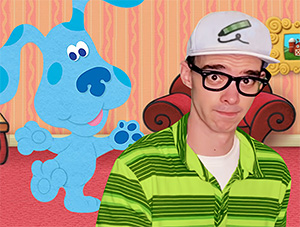 When Steve Burns unexpectedly left the children’s TV show Blue’s Clues it opened up some wild speculation among fans. Was it drugs? An illicit affair? Was he gay? How could he just leave us like this?

So when Steve Burns came back in a video which touched on the struggles of growing up and having jobs, family and student debt, the public was deeply moved. At the same time, it was almost like a deadbeat dad coming in for an awkward hug.

Our guest today is comedian Dan Cass, who’s hilarious video parodying Steve Burns instagram return makes us roar with laughter. Listen as we take a look at Blue’s Clues affected Dan’s generation and his hilarious parody video we think everyone should check out.