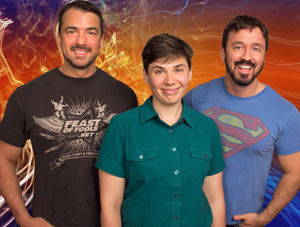 Comedian Carey Callahan got into hot water for speaking out about how hard it is for women to break into the Chicago comedy scene because the guys pick on female comedians.

At that time, Carey identified as female and now six years later, Carey is an awesome guy and is flirting with women himself as a comedian.

Listen as we chat with Carey about his fascinating take on sexism in comedy.