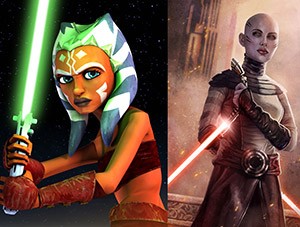 The Star Wars universe is getting its first official LGBT character with the release of the new novel Lords of the Sith. Although everyone always thought R2-D2 and C3-PO were gay, the new character is in fact a lesbian named Moff Mors, and not More Muffs.

Today writer Jack Ryan joins us to take a look at characters and actors in popular culture people have always thought were gay, but may be were just good friends.