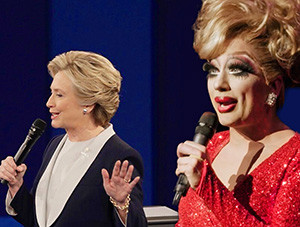 While the debate was going on, Bianca Del Rio stormed into Chicago to provide much relief from this depressing election with her she-larious new show “Not Today Satan” where she insults the crowd and weighs in on reality TV and RuPaul’s Drag Race.

Today, we take a look at Bianca Del Rio’s new comedy show in light of the second Presidential Debate, Trump’s pussy grabbing comments and why Kenneth Bone and his red sweater won the debate.