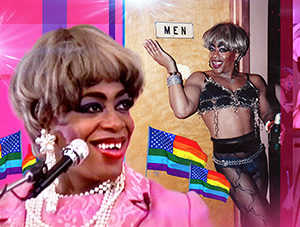 In the spirit of making a political statement, and shocking the squares, Joan Jett Blakk, backed by Queer Nation, launched her bid to become President of United States with the catchy slogan “Lick Bush in ’92.”

Today Terence Alan Smith, the artist behind the drag personage of Joan Jett Blakk joins us to talk about her election bid and how 27 years later she’s back making a big splash. Will she run again in 2020?