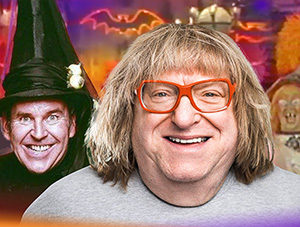 One of the strangest shows ever broadcast on TV is the Paul Lynde Halloween Special. The musical variety show featuring a campy highway pile-up of the top stars of the day with Margaret Hamilton reprising her Wicked Witch from the Izard of Oz aired only once on ABC in 1976.

Today comedy writer Bruce Vilanch, best known for writing for the Oscars and for his appearance on Hollywood Squares joins us to talk about being a head writer for the Paul Lynde Halloween Special.