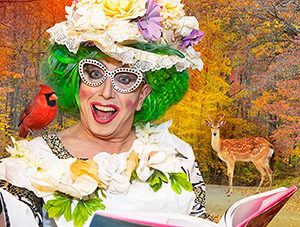 As the oldest drag queen yet to compete on a reality TV show, Kitty Litter didn’t know quite what to expect when she got on Camp Wannakiki, a web series where queens compete for the title of “Queen of Camp.”

Today Kitty Litter, the sassy southern gal from Camp Wannakiki joins us to talk about her adventures on the show and about that time she got arrested, and not just for stealing people’s hearts.