Miss Ronnie’s State of the Vajayjay 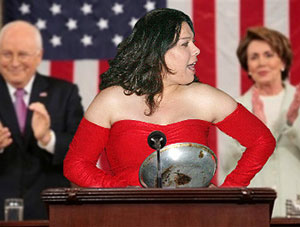 In this show titled FOF #466 – State of the Poontang published on January 24, 2007, Miss Ronnie does a sexy parody of The State of the Union Address, which at the time was delivered by President George W Bush. Between the war in Iraq and our legal standing as marginalized people, it seemed like the darkest of times. As an alternative to the bs State of the Union we offered up the State of the Vajayjay podcast and it brought so much joy to listeners, we just have to share it again.