By special request, my friend Donut McQueen loves horror films with a gay twist, so we’re sharing this Best of Fun epsisode today! (Originally posted on 10.02.08) 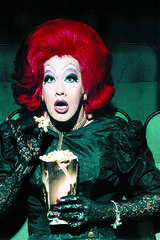 Look out behind you! Do not go in there! Watch out! You always see it coming, but somehow, the victim in many horror films is always ridiculously unaware that they are about to be bludgeoned to death. Why is that?

On today’s show we’ve got movie maven Peaches Christ talking with us about Horror Movies every gay man must see.

Why are queers so enamored by the horror film genre? Is it the themes of being an outsider seeking revenge on the world or is it the joy of seeing the jocks and cheerleaders hacked into pretty little pieces.

But is this a genre an unsuitable outlet for teen angst after the tragic events at schools like Columbie or Viginia Tech?

Listen as we talk with Peaches about films like Rosemary’s Baby, Silence of the Lambs, Nightmare on Elmstreet, Fright Night and Evil Dead.

Is Bruce Campbell a gay icon? Do the two Corrys suffer from Mather’s syndrome? And what is the queen of all horror films? 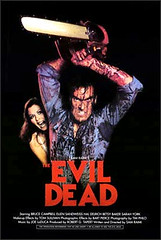 Plus a special surprise- Peaches reveals everything about her upcoming slasher film. Who are the celebrity stars cast in this exciting new move? Listen to the show if you vant to know. 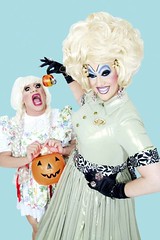 This entry was posted on Thursday, April 30th, 2020 at 12:13 am and is filed under Podcast. You can follow any responses to this entry through the RSS 2.0 feed. You can skip to the end and leave a response. Pinging is currently not allowed.