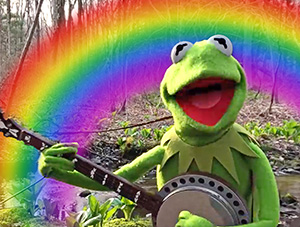 Pride may be postponed this year, but rainbows aren’t going anywhere. Besides being a symbol for celebrating sexual and gender diversity, rainbows are all about hope, and right now we sure could use it.

One of the most timeless songs about rainbows is the Rainbow Connection, originally written for the Muppet Movie by Paul Williams and Kenneth Ascher, which over the years became a huge cover song.

And now, Kermit the Frog is singing it again, socially distanced and unplugged from his lily pad in the Okefenokee Swamp.