Tick tock, you’ve been clocked… by a shark! If you thought Drag Race All-Stars was a treacherous tornado, wait until you catch Alaska Thunderfuck in The Last Sharknado: It’s About Time. Alaska stars as a woman fighting a tornado full of time traveling sharks, this is not a drill. Photos courtesy of the SyFy Channel and Magnus Hastings.

Sharknado is the only sci fi film that dares to ask: what if killer sharks could fly around in a tornado?

In the latest and quite possibly final installment of the series, The Last Sharknado: It’s About Time, one of our favorite drag queens, Alaska Thunderfuck, death drops for her life in hopes of surviving this tornado of murderous sharks, now with the ability to travel through time.

The film has it all: sharks, more sharks, Alaska Thunderfuck and so many celebrity cameos it could sink the Love Boat.

Today Alaska Thunderfuck joins us to take a bite out of The Last Sharknado film and to talk about playing the daughter of Star Trek’s Marina Sirtis in the movie.

Where no Ru Girl has gone before: Alaska pays tribue to her Sharknado film co-star Marina Sirtis by dressing up for Comic-Con as her iconic Star Trek character Deanna Troi. Photo courtesy of theonlyalaska5000/tvguidemagazine. 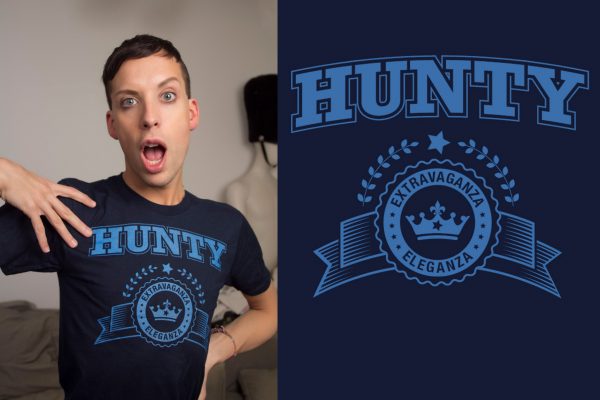 Love the podcast? Support Feast of Fun, get your very own HUNTY t-shirt, hand printed with shimmering blue ink. Click here to order yours today.

➤ Alaska weighs in on the Whitney Houston documentary “Whitney”

➤ What can reality TV stars do to maximize their appearance on any show?

This entry was posted on Monday, May 18th, 2020 at 11:32 pm and is filed under Drag Queens & Kings, Podcast. You can follow any responses to this entry through the RSS 2.0 feed. You can skip to the end and leave a response. Pinging is currently not allowed.