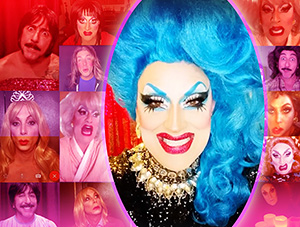 Comedy has an amazing power to heal, and Jackie Beat and Sherry Vine’s brilliant video series is getting us through the worst of the quarantine by bringing back to life some of our favorite sitcoms and campy film stars.

From Joan Crawford chastising Christina via video Facetime, to Stephen King’s Carrie getting berated by her twisted Trump loving mother, Jackie Beat along with her pals Sherry Vine, Mario Diaz, and Alaska Thunderfuck put the sickoning into sitcom.

Today Jackie Beat joins us from her home in LA to talk about her quarantine parodies of Three’s Company, Carrie, Mommie Dearest and The Golden Girls presented into a whole new genre: video conferencing sitcom.