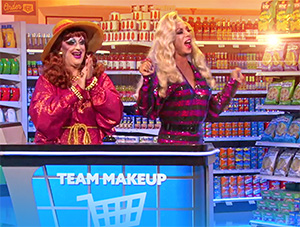 The TV game show Supermarket Sweep is back on the air on Sunday nights on ABC with SNL star and Drag Race judge Leslie Jones as the show’s host. To make the grocery themed quiz show even wilder they got two of the funniest drag queens, Jackie Beat and Sherry Vine, to join in as contestants competing for $100,000.

Their episode was absolutely she-larious, as Jackie’s quips cracked up the show’s host and Sherry Vine served up women of Wall-Mart meets Hollywood sex worker glamour.

Today Sherry Vine joins us from her pink boudoir in Burbank, California to talk about how she first met Jackie Beat 30 years ago and their hilarious appearance on the reboot of Supermarket Sweep.