C’mon Nevada! We’re waiting! Nomi Malone is what Vegas is all about, watch her as she shoves Trump down the stairs and out of our lives.
Thanks to Greg Haus for the inspiration! Illustration: Fausto Fernós.

Spoiler alert! Joe Biden and Kamala Harris won the 2020 US presidential election. The country is safe from evil again, and you were so worried, weren’t you? You lost so much sleep, didn’t you? You drank so much booze, didn’t you?

Despite the the Covid pandemic and the downturn in the economy Democrats still had a squeaker of an election, thankfully mail-in and early votes will probably save the day, with the battleground states of Michigan and Wisconsin going blue along with Arizona. 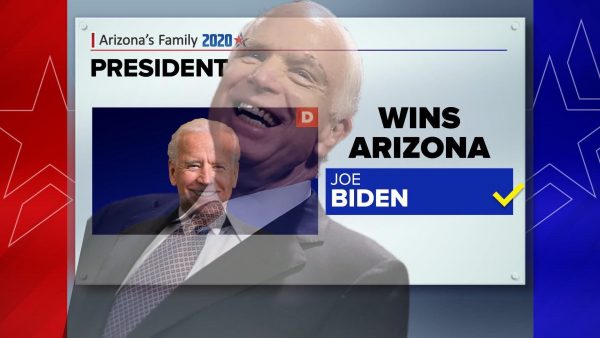 You know John McCain is laughing from his grave.

Right now we’re waiting for Georgia, Pennsylvania or Nevada to announce the results so we can finally say Trump, you’re fired.

Today we’re taking a look at the 2020 Presidential Election with some important news you may have missed.

➤ Justin Bieber’s hunky minster gets the boot from his church for allegedly tending to his flock without his clothes on.

➤ A 104 year old man votes in his 21st presidential election.

This entry was posted on Friday, November 6th, 2020 at 1:18 am and is filed under Podcast. You can follow any responses to this entry through the RSS 2.0 feed. You can skip to the end and leave a response. Pinging is currently not allowed.