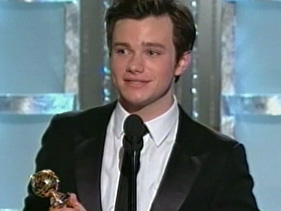 Glee’s Chris Colfer took the stage at the Golden Globes to accept his prize for Best Performance by an Actor in a Supporting Role in a Series, Mini-Series or Motion Picture Made for Television, he had a major statement for anyone feeling like they don’t fit in. “Screw that kids!”