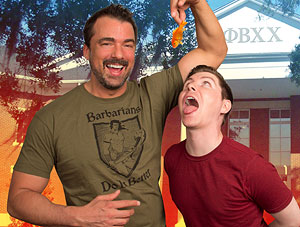 OMG! Another hilarious sorority letter is making the rounds on the internet, this one implores young women to have lots of sex, swallow loads, get drunk and then judge others for being sluts.

Today the fabulous Tommy Holl joins us to take a look at this outrageous letter and the controversy over Alaska’s comedy video getting yanked off the Huffington Post for depicting violence towards a transgender character.