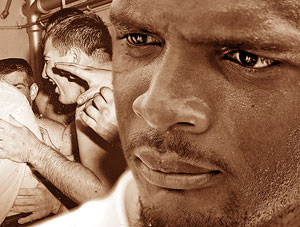 It’s been six months since Michael Sam was drafted into the Rams as the first openly gay player in the NFL. Recently, ESPN ran an update about the defensive end’s career and focused on the player’s shower habits.

Today, writer Zach Stafford joins us to take a look at the media’s odd fascination with Michael Sam’s shower habits, and why straight men look at each others dongs in the locker room a lot more than gay men do.