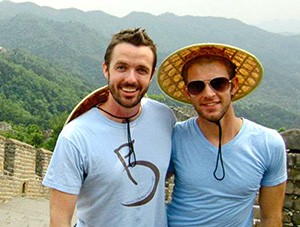 J Seth Anderson and Michael Ferguson were the first same sex couple to be legally married in the state of Utah, home of the Mormon church which poured millions into measures nationwide that aimed to deny people the right to marry.

More recently Michael successfully sued his former conversion therapist for fraud and permanently shut down the organization in the state of New Jersey. Listen as they talk about overcoming all the horrible trauma they sustained as gay men in the Mormon church.