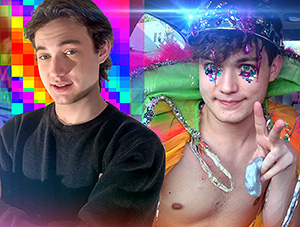 One thing we’ve long been fighting for is for everyone to fearlessly be themselves. So it’s great to see folks like Colin O’Leary shine on YouTube in his videos where he lip syncs rapid fire medleys of Broadway songs in wild costumes with full support of his family.

Today YouTube superstar Colin O’Leary, joins us to talk about how he started making his Broadway show tune lip sync videos in his family’s SUV while his mom Carol was nonplussed behind the wheel of the car.