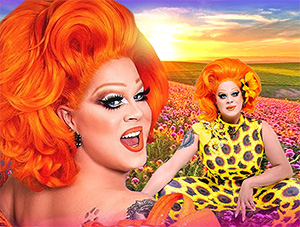 After auditioning for nine seasons of RuPaul’s Drag Race, Nina West was ready to throw in the make up smeared towel when she finally got that life changing phone call.

We all could see it in her eyes on every episode of Drag Race “I can’t believe I’m finally here.” Nina went on to win people’s hearts and became Miss Congeniality.