FOF #2889 – The Mandela Effect: Did Madonna Ever Meet Elvis?

Desperately Seeking Elvis: a young woman who may have been Madonna tries hard to get close to the King of Rock and Roll. Photo: Detroit Press Archives.

It’s Madonna’s birthday and it’s also the anniversary of the day Elvis Presley died. But does their connection go deeper than that?

Making the rounds again on the internet is an old archive image of a young woman bearing an uncanny resemblance to the queen of pop, trying to get close to Elvis, the King of Rock and Roll.

The black and white photo taken in 1970 in front of the Olympia Theater is hotly contested as to whether the young woman is or isn’t Madonna. Madame X isn’t speaking about it and perhaps she’s enjoying the mystery of it all and the wild speculation that the photo might be an artifact from a parallel universe.

Today we take a look at the mysterious photo of a young woman trying to meet Elvis. Is this an example of the Mandela effect: the phenomena where large groups of people can recall something that did not happen or remember it very differently from the way it actually occurred. 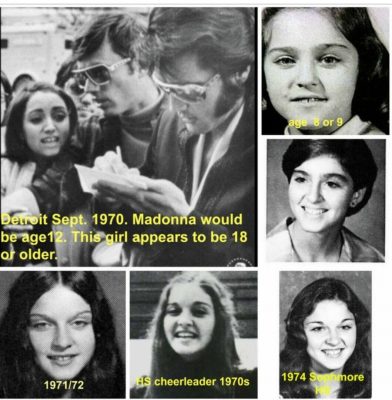 Young Madonna or a look alike? Only Madam X knows for sure. 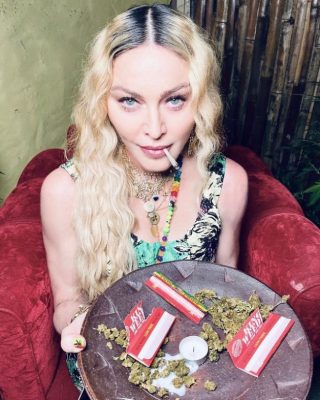 Madonna celebrates her birthday in Jamaica. She got so high, she probably thought she was Elvis. Photo: Madonna/Instagram.

➤ Soap opera hunk Wesley Eure, best known as Will from the tv show Land of the Lost had a love affair with actor Richard Chamberlain.

This entry was posted on Tuesday, August 18th, 2020 at 12:12 am and is filed under Filmmakers, Podcast. You can follow any responses to this entry through the RSS 2.0 feed. You can skip to the end and leave a response. Pinging is currently not allowed.