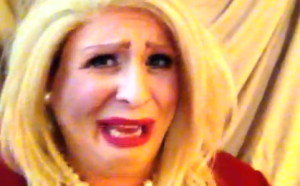 Mimi Imfurst is the most outrageous, controversial, and hysterical drag queen in the world. The QUEEN OF THE SCREEN, she is “must see T.V.” She has starred in and been a part of several of America’s favorite TV shows including ABC’s What Would You Do?, CBS’ The Tony Awards, MTV’s JACKASS, Logo’s RuPauls Drag Race and many more!

“THE HARDEST WORKING BITCH IN SHOW BUSINESS”, Mimi is a 12 time GLAMMY AWARD nominee and 3 time HX DRAG QUEEN OF THE YEAR Award nominee. She has performed in Bars, Dance Clubs, Cruise Ships, on Television, Film and even 35,000 feet in the air on an airplane. She has appeared in Star Magazine, People Magazine and even the National Enquirer. Her comedy has been the opening act of both Kathy Griffin and Academy Award Winner Mo’Nique.

View all entries by Mimi Imfurst