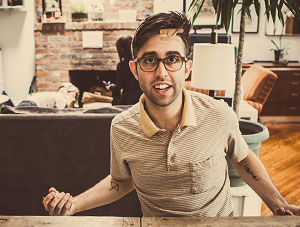 Two years ago filmmaker Mark Blane was accused of “gay-napping” two boys he babysat at a grocery store in Chicago. His experience as a male caretaker inspired him to develop CUBBY, a new film where a gay nanny develops a relationship with a older gay sex worker.

Today Mark Blane joins us to talk about his adventures in babysitting that led him seek crowd-funding to make his quirky film.