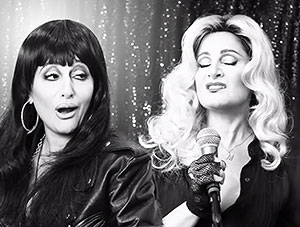 Comedian Nadya Ginsburg is quite the chameleon. She’s able to flawlessly transform herself into not just Madonna, but also Britney Spears, Winona Wider, Jennifer Lopez and Cher in her hilarious web series the Madonnalogues.

But did you know, Nadya worked for several years as a writer for the late comedy icon Joan Rivers? Listen as Nayda talks about what it was like to write for the queen of comedy.