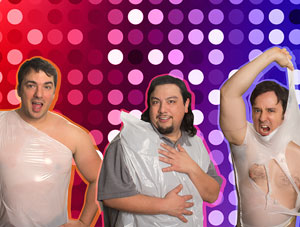 Comedian Bill Cruz is in hot water for his top ten list of Chicago male comedians he’d like to get jiggy with. Most straight guys got mad not because they were on the list, but because they didn’t make the cut.

Listen as we talk about who’se hot in Chicago’s comedy scene, rotten celebrities, and Lady Gaga confirms her latex costumes were inspired by condoms to promote safe sex.