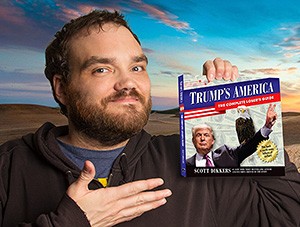 Comparing anyone to Hitler is stupid, but when the leading Republican candidate mimics Hitler’s rise to power, how can you blame anyone for making that comparison?

Today, comedian Brian Sweeney joins us to take a look at his new book “Trump’s America, the Complete Loser’s Guide” which he collaborated on with Scott Dikkers, the co-founder of the Onion.